London Fire calls for a stop to worker abuse 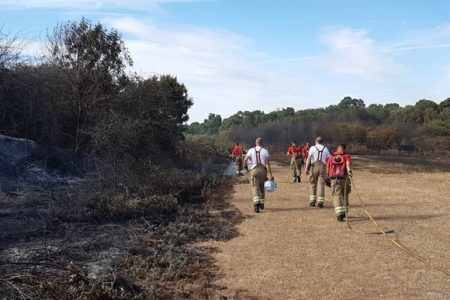 London Fire Brigade’s new Deputy Commissioner is calling for an end to abuse towards staff as new figures show firefighters and Control officers are increasingly suffering from regular incidents of offensive behaviour.

New data from London Fire Brigade, released on Emergency Services Day today, shows there have been more than 870 reports of physical and verbal assaults against our staff from 2020 to date. That’s a rise of more than 8% on the previous three years – there were 801 incidents from 2017 to 2019.

Last year alone, there were weekly reports of abuse towards firefighters and Control – with 353 incidents in total reported during the year.

So far this year, there have been 69 occasions when crews have been physically or verbally abused, including a spike in July, when firefighters were dealing with one of the busiest periods in the Brigade’s history during the summer heatwaves.

Control Officers have also dealt with more than 140 abusive phone calls so far in 2022, and abuse to Control reached a five year high last year with 248 incidents recorded – almost 50 more calls than each of the previous four years.

The Brigade’s new Deputy Commissioner for Preparedness and Response, Jonathan Smith, has said the figures are shocking and that any attack on an emergency worker is abhorrent.

He called for an end to abusive behaviour against fire service staff and their blue lights colleagues and said the Brigade won’t hesitate to take action and support the police to bring criminal charges against perpetrators.

He said: “It’s always disheartening to hear when a member of staff has been abused while doing their job.

“Any attack on an emergency service worker is abhorrent – whether it’s physical or verbal abuse.

“These people dedicate their lives to saving and protecting people and it’s appalling when they are ever hampered in doing this by aggressive members of the public.”

Last month, firefighters were assaulted and threatened by a man after being called to a bonfire in Thornton Heath. Fortunately, none of them were injured but the crew had to call police for backup as the situation escalated. A 26-year-old man was arrested on suspicion of assaulting an emergency worker and has been bailed pending further inquiries.

Earlier this year a crew of firefighters was threatened with a knife and spat on in Tottenham and last year, a firefighter was attacked while attending a fire at a block of flats, also in Thornton Heath. Had it not been for his helmet, he would have sustained serious head injuries.

Firefighters are not usually on the receiving end of as much violent behaviour as colleagues in the police and ambulance service, who sadly face thousands of physical and verbal attacks each year.

Deputy Commissioner Smith added: “We take all attacks on our staff incredibly seriously and have already put our weight behind the Assaults on Emergency Workers Act which increased sentencing guidelines for such attacks.

“If staff are on the receiving end of abuse, they are always supported by their manager and our Counselling and Trauma team if needed.

“I want to remind Londoners that whenever they see us or our blue light colleagues out and about – in what are often very difficult circumstances – please be kind and don’t make a tough job even harder.”