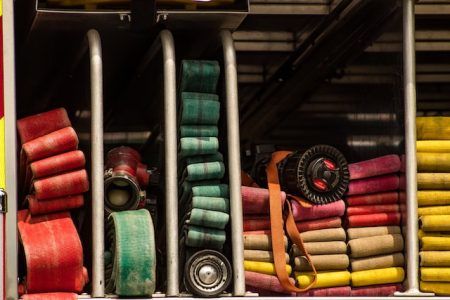 Up to a dozen firefighters who tackled the blaze at Grenfell Tower have been diagnosed with terminal cancer. According to reports, the cancers are understood to be mainly digestive cancers and leukaemia.

Firefighters and survivors from the disaster have called for medical screenings as a list of rescuers who went to the west London fire in 2017 and have cancer is being drawn up.

Strokes, heart disease and kidney failure are also understood to have been recorded among the heroes – possibly due to the physical toll on their bodies during the tragedy.

“We are expecting some really depressing data to be revealed soon. It’s shocking,” a fire service source told the Mirror.

Some of the 1,300 firefighters thought to have attended the scene were left in their contaminated suits for more than 10 hours while others were in a smoke-filled basement for up to six hours.

Firefighters ran out of air and could have breathed in smoke.

Analysis carried out on the debris found there were heightened concentrations of chemicals that cause cancer and proven carcinogens within 200 metres of the tower, the paper said.

Responders were also seen outside the tower in the days after the blaze without protective kit, with some experts fearing toxins could have been even worse for people in the wake of the blaze.

Meanwhile, research this week found firefighters are twice as likely to end up being diagnosed with cancer if they find soot in their nose or throat, and the same rate applies to those who stay in their often contaminated kit for more than four hours after a fire.

Riccardo la Torre, Fire Brigades Union national official, said: “This vital research proves that firefighters are suffering and dying from cancer, strokes, heart disease, and mental ill health as a result of going to work and protecting the public.

“We now know that firefighters are exposed to health and life-threatening contaminants as a result of their occupation, and certainly would have been at an incident the size and scale of the Grenfell Tower Fire.

“However, firefighters are left in the dark due to the lack of regular health surveillance and proper monitoring of exposures in the UK.

“Due to this inaction by the government and fire bosses, the Fire Brigades Union is commissioning further research to help us demand proper protection and support for our members who attended Grenfell, and for firefighters all over the UK.”

David Badillo, the first firefighter who went in, said: “On a personal level it’s very worrying. I’ve got two young kids and I want to see them grow up.

“I’ve been scanned and nothing’s come up, thankfully, so far, but you don’t know what could happen in the future.”

Another firefighter said he felt suicidal and had been left with scarred lungs.

“I’ve heard loads of guys and girls have been sick with the ‘Grenfell cough’ and I’ve never smoked a cigarette in my life,” he said.

The Grenfell tragedy left 72 people dead and set off a series of inquiries into the response and building safety.

Other buildings’ cladding has been reevaluated after the fire, with residents calling for them to be removed and waking watches being set up outside some properties.

A London Fire Brigade spokesperson said: “Our firefighters must be as safe as possible when doing their jobs and we are currently involved in two studies to investigate the possible impact of contaminants on health, including one directly linked to the Grenfell Tower fire.

“All firefighters and officers who attended Grenfell have been invited to take part in the research project, which carefully monitors their health even after they retire or leave the service. Staff also have access to our occupational health service to support them through periods of ill health.”