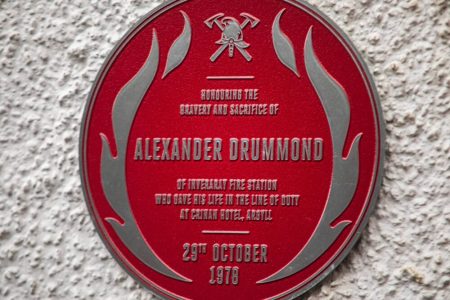 The Fire Brigades Union has unveiled two new plaques as part of its Red Plaque Scheme which commemorates firefighters who lost their lives in the line of duty.

A plaque has been unveiled for a Scottish firefighter who died in the line of duty, on the 44th anniversary of his death.

On the 29th of October 1978 Firefighter Alexander (Sandy) Drummond of Inveraray Fire Station lost his life fighting a fire which badly damaged the Crinan Hotel in Argyll.

As well as serving as a firefighter Mr Drummond was a former town and county councillor and magistrate, being described as a “noted member of the community” in The Oban Times at the time of his death. The unveiling ceremony was held on Saturday the 29th of October 2022 at Inverary Fire Station, where the plaque is now situated.

A plaque was been unveiled for a Sale firefighter who died in the line of duty in 1909. Superintendent John Johnson Hunt, aged 65, was fighting a fire at the Brooklands Hotel in Sale when a portion of the roof fell on him. He later passed away as a result of his injuries.

His funeral and funeral procession were attended by “thousands” according to the Sale Guardian at the time. The plaque was unveiled at the site where he died, which is now an office building owned by Bruntwood, on Friday 24 October. A wreath was laid at Mr Hunt’s grave in Brooklands Cemetery following the unveiling.

Mr Hunt was an experienced and well-respected firefighter, having had a 40-year fire service career in both Manchester and then Sale, and received several awards. He had trained several company in-house fire brigades and advised on the establishment of a new brigade.

His career was also marked by bravery and near-misses. One instance in 1885 involved him saving a fellow firefighter’s life by crawling along a sixth-floor parapet in dense smoke, an incident which saw him receive several awards and have a song written for him.

The Red Plaque Scheme is fully funded by proceeds from the weekly Firefighters 100 Lottery which has been able to create several Plaques each year since it began in 2017.

Matt Wrack, Fire Brigades Union general secretary, said: “No firefighter who gives their life in the line of duty will ever be forgotten, no matter how long ago they died. Making sure that every firefighter is remembered has huge importance for firefighters and their families. It helps our communities understand the huge sacrifices firefighters make and the risks they face. It helps firefighters feel connected to the long line of people who have been before them.