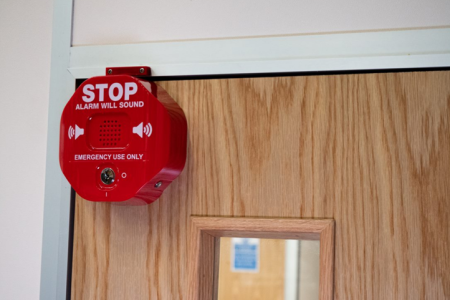 STI presents their latest innovation in the emergency evacuation and protection of fire doors sector. The Exit Stopper door alarm can be fitted to vulnerable emergency exit doors

Under Article 14 of Regulatory Reform (Fire Safety) Order 2005: “Emergency doors must not be so locked or fastened that they cannot be easily and immediately opened by any person who may require to use them in an emergency” therefore “in the event of danger, it must be possible for persons to evacuate the premises as quickly and as safely as possible.”

A disregard for fire safety regulations can have dire consequences; on Tuesday 8 May 1979, a fire ripped through Manchester’s flagship Woolworths store opposite Piccadilly Gardens. A number of fire safety failures contributed to the death of ten people inside the premises and left 47 individuals with injuries.

Emergency exits were poorly marked; some exit doors required a key, while others had been locked to prevent shoplifting. Those attempting to flee the toxic smoke were unable to escape through the very doors that were there to save them. People died within touching distance of the emergency exits.

To comply with current regulations and maintain adequate means of escape, STI’s Exit Stopper® door alarm can be fitted to vulnerable emergency exit doors. The alarmed device is a highly effective way to alert you to unauthorised exits or entries through emergency exit doors.

Text and symbols on the Exit Stopper® act as a deterrent to misuse, the unit also serves as an inexpensive security device helping to guard against theft, safeguarding escape routes for real emergencies and eliminating the temptation to lock emergency exits to discourage would-be thieves.

Fire doors must be closed in order to stop the spread of smoke and fire, however, it is worryingly common for fire doors to be dangerously held ajar. 64% of premises visited by the Fire Service had fire doors wedged open – universities halls of residence, hotels, and residential homes are among the worst offenders.

Should you prop open a fire door, putting lives at risk, there is potential for large fines, void insurance, or even a prison sentence. In 2010, a landlord was fined and jailed after a tenant almost died in a blaze, it was the third time Mike Billings had been prosecuted for breaching fire, health and safety laws – which included wedging open fire doors.

Under the Regulatory Reform (Fire Safety) Order 2005 the responsibility for fire risk assessment in all non-domestic buildings is the duty of a “Responsible Person”, it is within these persons remit to ensure regular checks and maintenance of fire doors.

The RRFSO outlines the necessity of effective security to prevent the misuse of fire doors, maintaining successful operation in a real emergency: “Enforcing authorities may wish to advise landlords of the need to maintain adequate security relating to fire doors.”

Alerting you to any misuse of fire doors, the Exit Stopper® will emit a powerful 95/105 dB warning alarm and visual flashing beacon if the protected door is opened. An optional 15-second trip delay enables the unit to be fixed to a door in regular use, allowing the door to be used as required, but preventing it from being dangerously wedged open.

Once the door fitted with the Exit Stopper® is closed several reset options are available including an automatic silence function, a feature that is particularly useful for fire doors that are in regular use, but still at risk of misuse – a key for authorised personnel can be used to override the alarm.