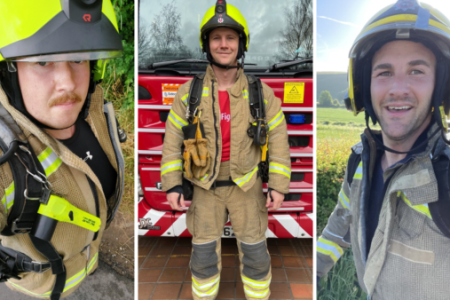 Firefighters from across the UK are set to run this year’s London Marathon in full fire kit and heavy breathing apparatus sets, to raise funds for The Fire Fighters Charity.

They each chose to support The Fire Fighters Charity for their own personal reasons, having seen the support it offers first-hand – and what a difference it can make.

The Charity supports the health and wellbeing of serving and retired fire and rescue service personnel, their dependants and other eligible members of the UK fire services community, throughout their lives, helping them to live happier and healthier.

Dan began fundraising for the Charity after tragically losing a colleague to cancer last year. He’s now hoping to complete the marathon in full kit while carrying a breathing apparatus (BA) set.

He says: “I’ve witnessed the great work that the Charity can offer through my close friends and colleagues. It is very reassuring knowing that this service will be there to support both me and my family, if called upon.

“Last year we lost a colleague to blood cancer, a serving Watch Manager who lost their life far too early. In his name, and raising money for charity, a group of firefighters from DWFRS ran the Bristol Half Marathon in full fire kit and BA. From that incredible event, I have developed a strange passion and obsession to running in fire kit and BA!”

Meanwhile, Luke said of his own marathon effort: “Being a firefighter since 2018 I’ve seen the efforts everybody makes to support The Fire Fighters Charity and I’d like to do my part by raising as much money as possible by running the marathon in full uniform. I raised £3,000 on the first two marathons I ran and over £5,000 on the third, all for cancer charities.”

And Will said: “When I joined the service in 2020 I found out about the Charity, and that most of my colleagues with 10+ years’ service had needed their help at some point.

“I then set out with the aim of doing a charity event for The Fire Fighters Charity every year of my career. Having done a full fire kit and BA half marathon in 2020, and then a 5km dummy drag in 2021, a marathon in fire kit and BA seemed the next logical step. So, the London Marathon here we come!”

With The Fire Fighters Charity relying almost entirely on donations to fund its vital work, none of the support it offers people like this would be possible without the generosity of its supporters.