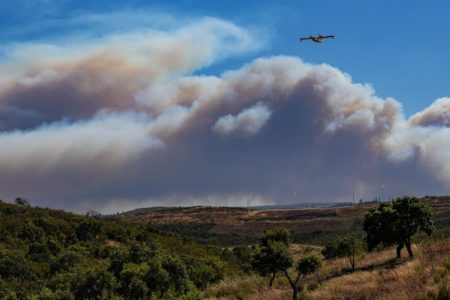 Sometimes fires, especially wildland fires, can often be so hostile that an approach from the ground is impossible. What advantages does taking to the air have over conventional firefighting?

We have already discussed in length in this issue the emerging threat of persistent wildfires is having on the natural world. Its all-consuming rampage threatens to engulf much of the green spaces in various regions around the world, tightening the vice grip the climate change crisis is having on everyday human life. The excessive heat, flames and smoke terraform these once-beautiful spaces into hostile hellscapes, making fire and rescue operations not only difficult, but threatening to human life and infrastructure.

So, how do you go about fighting or containing a fire that tries at every turn to keep you out? If conducting ground operations is off the cards, fire services must take to the skies in order to fight these fires. Aerial firefighting is a method of containment that is on the up in recent years, accelerated by the influx of forest fires. However, hardship breeds innovation: aerial firefighting is quickly becoming the go-to method for fighting wildland fires. But how do fire services go about scrambling these “waterbombers” and what arsenals are they equipped with the combat these? Let’s take a look.

By definition, aerial firefighting is the use of aircraft and other aerial resources to combat wildfires. The most commonly used aircraft are fixed-wing aeroplanes and amphibious planes, as well as helicopters. These vehicles are specially equipped with water storage tanks and other firefighting devices, often used in accompaniment with water enhancers such as foams and gels: as the payloads of these vehicles are often dumped in one go, it is important to ensure that the efficacy of these “drops” are as high as possible. Aerial firefighting can also be utilised in combination with other ground operations for a coordinated effort, known as an “air attack”. Aerial firefighting also constitutes the deployment of operatives from a helicopter into the site, either through rappelling or parachuting from the vehicles.

The earliest inception of aerial firefighting was theorised all the way back in 1929, when German aviator Friedrich Karl von Koenig-Warthausen – the first pilot to complete a solo flight all the way around the world – observed a forest fire occurring below him as he flew over the Santa Lucia Range in California. Back then, many planes were built only to accommodate a flight crew and not the burdensome loads of water and suppressants; it would be decades still before aerial firefighting would see any real world application. The only real documented attempt at aerial firefighting around this time occurred in 1930, when the US Forest Service utilised a Ford Tri-Motor plane to drop a water-filled beer keg over a fire.

The first real push to make aerial firefighting a commonplace practice came in the years after the Second World War, when America found itself in possession of a vast surplus of military aircraft, most notably Boeing-Stearman Model 75s: biplanes that were constructed in the 1930s and 1940s.

One Joe Ely, a man who was working for the US Forest Service in 1955, pushed back against the idea by the masses to repurpose these planes as crop dusters, seeing their potential to fight fires from the air. Combining forces with a willing and eager agricultural pilot, a man named Floyd Nolta.