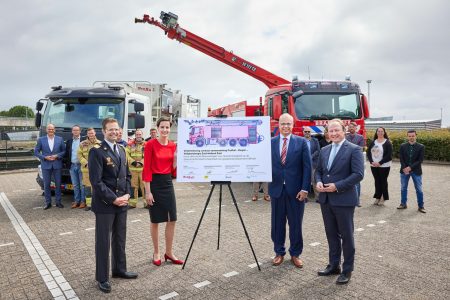 The Safety Region Zuid-Holland Zuid (VRZHZ) and ProRail receive three industrial firetrucks for Kijfhoek railway zone and rail zone Dordrecht. Ziegler Brandweertechniek will build the three industrial firetrucks. This means, an important step is taken in further improving the security at the yard Kijfhoek in Zwijndrecht. The safety region Zuid-Holland-Zuid (VRZHZ), ProRail and the municipalities of Zwijndrecht and Dordrecht are continuously working together to further improve the security and to combat incidents along the rail zone between Zwijndrecht and Dordrecht.

At the beginning of June, the contract was signed by VRZHZ, ProRail, the municipality of Zwijndrecht and Ziegler Brandweertechniek B.V.. On July 7th, this joyful moment was commemorated. Mayor Hein van der Loo of the municipality of Zwijndrecht says: ”The purchase of these industrial firetrucks is one of the measures to make the Spoorzone and Kijfhoek even safer. These vehicles allow the fire brigade to fight an incident safely and quickly. That is in the interest of all of us. It is now up to our partner ZIEGLER to deliver the fire trucks on time.”

Incident response on and along the railway

The industrial firetrucks are used to combat incidents on and along the railway. For this reason, the VRZHZ and ProRail work closely together. Based on this collaboration, a market survey was conducted for the order for the three identical industrial firetrucks. The collaboration between the VRZHZ and ProRail is extremely important since the work will be done by interchangeable vehicles. The requests of the fire department are included, as well as the operational principles. The tender was awarded to Ziegler Brandweertechniek B.V..

The industrial firetrucks are completely engineered and manufactured in the Netherlands by ZIEGLER in Winschoten. The production process takes approximately 12 months. After the production, there an extensive quality check and practical tests will follow. The entire process takes about 24 months to delivery.

“ZIEGLER is very pleased to be able to realise this assignment. We are used to build special and custom-made vehicles, but each special has its own characteristics. This vehicle with the 360 degrees rotatable Z-Attack HRET extinguishing arm is the solution for the described scenarios.”