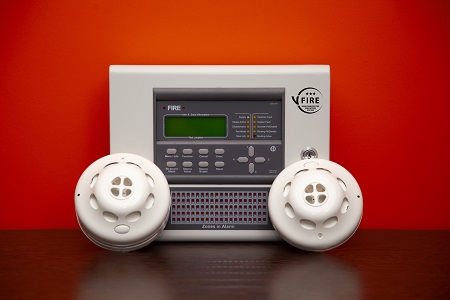 In the wake of the Grenfell disaster, thousands of leaseholders across the UK have shouldered the financial burden of either a wired alarm solution, or a waking watch fire marshal, which could cost more than £340,000** a year for a medium-sized 6-storey block of 34 flats.

With experience across construction, corporate and property sectors, Prime Secure has utilised its wireless technology expertise from its CCTV systems, to develop the solution – a fully compliant common fire alarm system – costing just over £61,000 a year for a same sized property.

Currently, waking watch fire marshals maintain a presence on each floor of buildings identified as having dangerous cladding; continually patrolling the interior and exterior 24/7, in order to detect a fire, raise the alarm, and carry out the role of evacuation management.

Rented rather than bought outright, the alarm system negates the need for these expensive marshals, a requirement for more than 460 buildings across the UK, which the company estimates will constitute an average leaseholder saving of 82%. The announcement follows the closing of the Government’s Waking Watch Relief Fund, a £30 million fund for the costs of installing an alarm system in buildings in England with unsafe cladding, with only a third (179) of the 460 buildings identified as at risk were successful in applications.

The Government’s own findings suggest the interim measure of waking watch fire marshals can cost between £12,000 and £45,000 per week per building, depending on the number of individuals and hours covered. As the financial burden will now be shouldered by residents, Prime Secure says a cost-saving tech solution is now more important than ever.

According to the company, the pre-configured V-Fire solution is quick and easy to install, without any impact on existing fire compartmentalisation, with its high-tech nerve centre capable of monitoring and controlling any number of BS EN54 certified heat detectors.

On every deployment, Prime Secure provides each high-rise development with a personal client liaison manager.

Prime Secure’s Duncan Cromb said “The updated guidance, in the event of fire in buildings with flammable cladding, is to simultaneously evacuate all residents. In buildings with unsafe cladding, thousands of residents across the UK have had to pay for the deployment of cost-prohibitive waking watch marshals to adhere to this.

“However, common fire alarm systems can do the same job a lot quicker and more cost-effectively. Our solution is specifically designed for this use and can be cheaply and easily converted to a permanent simultaneous evacuation alert system for exclusive use by the fire brigade, and in line with a stay-put evacuation policy, if and when the flammable cladding has been replaced.

“Wireless technology has helped to revolutionise security in the construction industry – with CCTV towers replacing security guards, delivering massive cost savings, and increasing effectiveness – and now it is the waking watch market’s turn. The V-Fire common fire alarm system is rented at an affordable monthly cost per apartment, with the option to either remove or convert the system to a common fire alarm in the future, should building regulations change, as is widely expected.