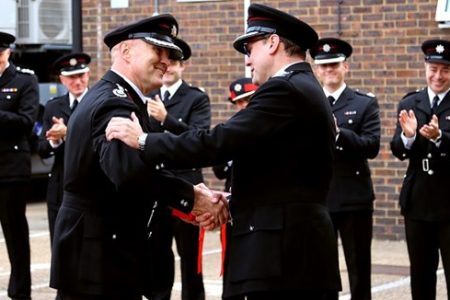 During his service he has played a key role in many crucial changes to the Brigade’s operational policies and equipment, from overhauling the response to high rise firefighting, the introduction of the Fire Survival Guidance App and securing the Marauding Terrorist Agreement with the Fire Brigades Union.

These changes have allowed the Brigade to better serve the communities of London and adapt to the changing built environment. Most importantly in recent times, Richard led the Brigade’s response to the Covid-19 pandemic through two exceptionally challenging years that required tough decisions to keep our service running for the people of London.

Over his long career Richard has been involved in many significant incidents including the London riots, where he was the Borough Commander for Haringey, a large fire at the Mandarin Oriental hotel and the Grenfell Tower fire.

Deputy Commissioner Richard Mills said: “Over the years the role of a firefighter has evolved, it has been shaped by moments in history which have led to change.

“Historic moments such as the fire at Kings Cross Station, the 9/11 terror attacks, the 7/7 bombings and the Grenfell Tower fire have changed our direction of travel. We have learned and changed from these historic moments, and from every incident we attend.

“We have recognised the need to adapt, and I have seen many changes throughout my career in the ways we fight fires. There have been so many developments to our response over the years and the equipment we use that has enabled us to acclimatise to the changing environment and I am proud to have played a role in that transformation.”

Richard began his career in 1992 as a fresh faced 19-year-old at Leytonstone Fire Station. His youth was a novelty to the watch he joined as the other firefighters were all experienced and had been in the Brigade for a long time.

When he first joined the Brigade, it was very different to now and Richard has seen many changes in firefighting. In his first locker there was a pair of yellow plastic leggings, which had been part of the uniform in the 80s. The equipment was more basic and his breathing apparatus was twice the weight of what it is now weighing around 19kg – now it weighs about 10kg. There were no computers at fire stations and crews had to fill in incident returns using a typewriter.

“When I first joined there wasn’t anywhere to go to talk about what you’d seen or how you were feeling, the views on mental health were very different to what they are now. Now mental health is something that is discussed more openly. The Brigade has a counselling service, which is accessible to all staff, after a challenging incident the crews can talk freely about it and we check on them.

“We aren’t machines, under the uniform we are human and can be affected by what we see – I think that can sometimes get forgotten. We are now in a position where we can openly discuss how we are feeling, which is a such a positive step forward.”