When emergency strikes at a civilian or military airport, aircraft rescue and fire-fighting (ARFF) vehicles are required to accelerate quickly and reach speeds of up to 120 km/hour.

But such trucks also need enough power to drive a water pump, water gun, hydraulic boom and piercing tools — no small task for a 50- or 60-tonne machine that is already expected to get up to 100 km/hour in just 25 seconds.

That’s where the Volvo Penta dual-engine system comes in. For airport fire-fighting vehicle manufacturers Rosenbauer and ISS Wawrzaszek (WISS), Volvo Penta provides two 16-litre diesel engines (TAD1661VE or TAD1662VE) that yield a combined 1,300 to 1,400 horsepower. When a single engine is required to reach 1,300 hp on its own, splitting power among functions is more difficult. With the Volvo Penta system, both engines can be used to power the drive train to quickly reach an incident, but one engine can just as easily power the drive train single handedly, while the other runs the fire-fighting equipment.

Volvo Penta began delivering engines to the Polish WISS and to Austria’s Rosenbauer in 2012. The company is well positioned to meet the unique emissions needs of airport fire-fighting vehicles. For the WISS Felix II ARFF vehicles — of which there are two at work in the world — Volvo Penta provides its industrial versatile engines: the 16-litre TAD1661VE (450 kW/612 hp) or TAD1662VE (515 kW/700 hp), which adhere to European Union Stage IIIB emissions standards for off-road engines.

With Rosenbauer, Volvo Penta has worked to come up with a bespoke solution. For the Panther ARFF vehicles, the same engines are used as for WISS — the TAD1661VE and the TAD1662VE — but Volvo Penta has adjusted them to meet Euro 5 on-road emissions standards. “We classify and make these engines specifically for Rosenbauer,” says Marek Tunski of Volvo Penta East Europe. “We’ve done some cooling modifications, as well as installed a different diagnostic system in line with Euro 5 standards.”

For Rosenbauer, Volvo Penta has worked to help develop a narrower, lighter Panther vehicle — compact enough to be taken on main roads and highways. The engine company has also developed a package for Rosenbauer that includes a unique engine alignment and easier service access for maintenance.

In addition to Volvo Penta engines, Rosenbauer also uses Volvo chassis for the standard vehicles in the Panther line. Volvo commercial chassis are heavy-duty and versatile enough to accommodate a variety of extra fire-fighting equipment — from tanks and sprayers to hydraulic tools and boom trailers.

Another new area of cooperation with Volvo Penta has been opened up with the new Stage IV emissions regulations for industrial engines: The portable diesel pump units built by Rosenbauer are now equipped with Volvo Penta engines as well. 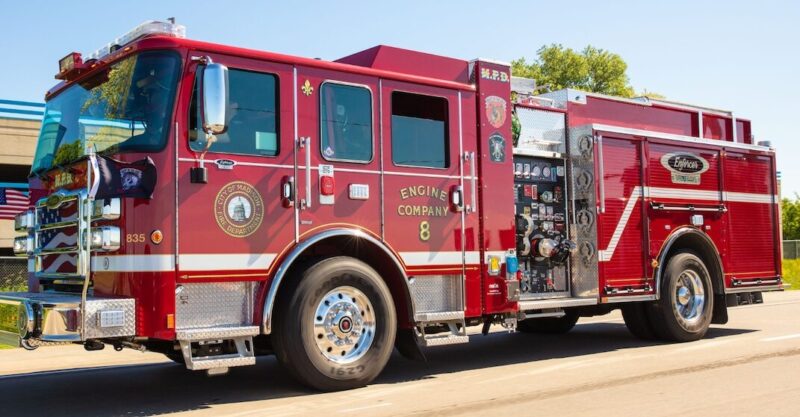