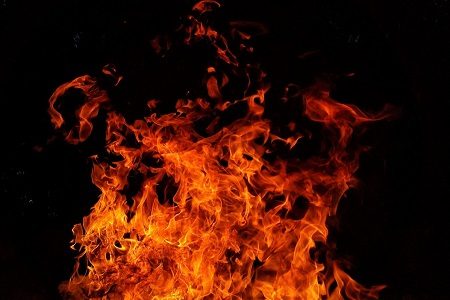 A forest fire (also known as wildfire) is an unplanned and uncontrolled fire in an area of combustible vegetation such as forest, grassland or prairie. It is often caused by human activities or natural phenomenon like lightning. Nevertheless, according to a World Health Organization report, in 50% of wildfires recorded, the cause that triggered them is unknown.

Mountainous regions, like Rizhao in Shandong Province of China, is vulnerable to forest fire. Recognied by the United Nations in 2009 as one of the most habitable cities in the world, this city consists sof 4,358 mountains, with a forest area of 1,400 square kilometers that account for 70% of the region. The Illegal wood burning in the area, if not controlled properly, can lead to a disastrous wildfire.

For decades, forest rangers manually scout and monitor the area, walking nearly 10 kilometers of treacherous trails for several hours a day to safeguard the forest against threats like wildfire. However, this arduous method of patrolling is inefficient as it will be difficult to respond in time in case of emergencies. As their first line of defense, they need a robust solution that can monitor and spot fire sources in time to prevent possible forest fire.

At the beginning of 2020, Dahua Technology provided an intelligent forest fire prevention monitoring system for Rizhao. This solution realises automatic early warning of fire, real-time fire control and closed-loop response through digital intelligence technology, significantly improving forest fire prevention and dispatch. At present, high-altitude dual-lens thermal imaging cameras cover the main mountains in the city, carrying out 360 ° remote monitoring 24/7. This solution also offers real-time sensing and intelligent management of people and vehicles coming in and out of the forest areas.

Forest fires are often difficult to detect in deep mountains and forests with high vegetation, which often causes late detection and response. Through the integration of AI algorithms and thermal imaging technology, fire detection time is shortened, allowing the device to detect smoke and fire source within a radius of nearly 10 kilometers. The fire’s location, intensity, and surrounding conditions are initially determined and sent to the operator’s mobile phone, allowing relevant personnel to respond in time within the ‘golden time’ of extinguishing early fire.

Furthermore, in order to reduce false alarms, the system adopts algorithms for deep smoke and mountain scanning, thus improving the accuracy of real fire alarms and saving manpower and material resources. Fire prevention personnel are no longer exhausted of their daily duties, which helps boost their enthusiasm at work.

In addition, this solution also includes a forest fire prevention platform that operators can use to check for any fire situations. It can also guide them for effective decision making and timely dispatch of personnel to the scene, achieving a closed-loop management of fire prevention – from discovery, dispatch and feedback.

After half a year of operation, the system has detected more than 30 real mountain fires. The average number of fires found every day during fire season has significantly decreased by 80% compared with the initial stage of the project. This reflects the effectiveness of the solution in fire monitoring and the increasing awareness of villagers regarding fire safety.