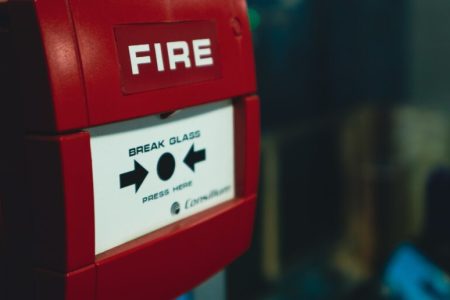 Fire and smoke alarms have been a staple in building fire safety for decades now, but its inclusion of everyone remains archaic: today, we look at alarm systems that are made for everyone, not just the majority

There are many working parts to ensuring fire safety in buildings everywhere. Alarms, sprinkler systems, labyrinthian pump systems and more recently, smart detection systems, all play an integral part in keeping buildings and their denizens safe from fires. These systems equally also serve either the former, the latter or both. While preserving buildings in the event of a fire is preferential, it is the technology and solutions that keep people safe that is paramount – buildings can always be rebuilt, people cannot. One of the most important cornerstones of the fire protection arsenal, then, is the humble smoke and fire alarm. Years of constant reinvention and innovation upon this simple system have put smoke and fire alert systems in a very reliable spot: while we may complain about the shrill and ear-splitting sound these devices emit in a false alarm situation, at least we know that in the event of an actual fire emergency, most people in a public space or building will be sufficiently informed of the danger. But that’s wherein the problem lies: the emphasis on the word most.

Fire alarm systems are extremely effective at serving the many, but the few can feel like they’ve been left to the wayside. The few in question here are those with sensory impairments: the deaf and those sensitive to loud noises. Current estimates in the UK alone indicate that there are around 9 million deaf or hard of hearing people living in the country, and around 700,000 people with an official medical diagnosis of autism spectrum disorder. These numbers are by no means small, making up around 7% of the UK population. More must be done with commercial and residential alarm systems, especially in public housing, to accommodate for these people. According to a study conducted in 2010, 17% of UK households resided in council housing, with another 55% of housing stock owned by local authorities. This means that well over half of all homes in the UK are retrofitted with generalised fire safety equipment, which may prove unsuitable or even hazardous to marginalised groups. To compound on this issue, many deaf or autistic people need additional support when it comes to living independently – meaning they may not have the income available to them to own their own home and afford to install the equipment that is better suited to them. The solution, then, is clear – a homogenised fire alarm system that is both visually and audibly distinct needs to become the standard for every building in the UK. Today, we’ll take a closer look at the options available for these people and what the future may hold.

Most commercial alarm systems have no visual indication when they activate, which means that the deaf in conventional and public spaces have no way of telling when the alarm has detected a fire. For others with autism or a sensitivity to loud noises can feel overwhelmed or even frightened by the skull-rattling sound that alarms emit, making safe evacuation difficult for them as they struggle to function in what to them is now a very hostile environment. These people are just as valuable as anyone else in the building, so why must they feel excluded? Oftentimes, the only indicator for deaf people is the coordinated movement of others and if people with sensory issues are not supervised at the time of the alarm, they may be so overwhelmed that they are incapable of moving to a safe area. With the amount of technology at manufacturers’ disposal in the modern era, why aren’t we making systems for everyone?