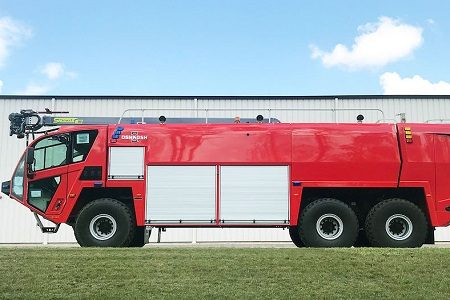 Oshkosh Airport Products, an Oshkosh Corporation Company, announced that the Isle of Man Government has received three Oshkosh Striker 6×6 ARFF vehicles. Oshkosh Airport Products is a designer and builder of airport firefighting vehicles. Its flagship Striker Aircraft Rescue and Fire Fighting (ARFF) vehicles are known for their durability and superior performance and sold throughout the world.

The Isle of Man is a British Crown Dependency in the Irish Sea between Great Britain and Northern Ireland. The new Oshkosh Strikers were delivered in early December, 2021, and support operations at the Isle of Man Airport (IOM). Extensive training has commenced in preparation for the vehicles to enter front line service in the first quarter of 2022.

“This delivery represents the first Oshkosh Strikers for the Isle of Man Government and the vehicles will provide essential advancements in acceleration, maneuverability, firefighting capabilities, and safety technology for the fleet,” said Jack Bermingham, business unit director for Oshkosh Airport Products. “Supported by Terberg DTS UK, IOM will have convenient access to critical service support for the aftermarket care of their Striker ARFF vehicles.”

Also known as Ronaldsway Airport, IOM Airport is located in the island’s southern region and southwest of Douglas, the island’s capital. Along with the Isle of Man Sea Terminal, it is one of two main gateways to the island and services over 800,000 passengers yearly.