The evolution of the firefighter uniform 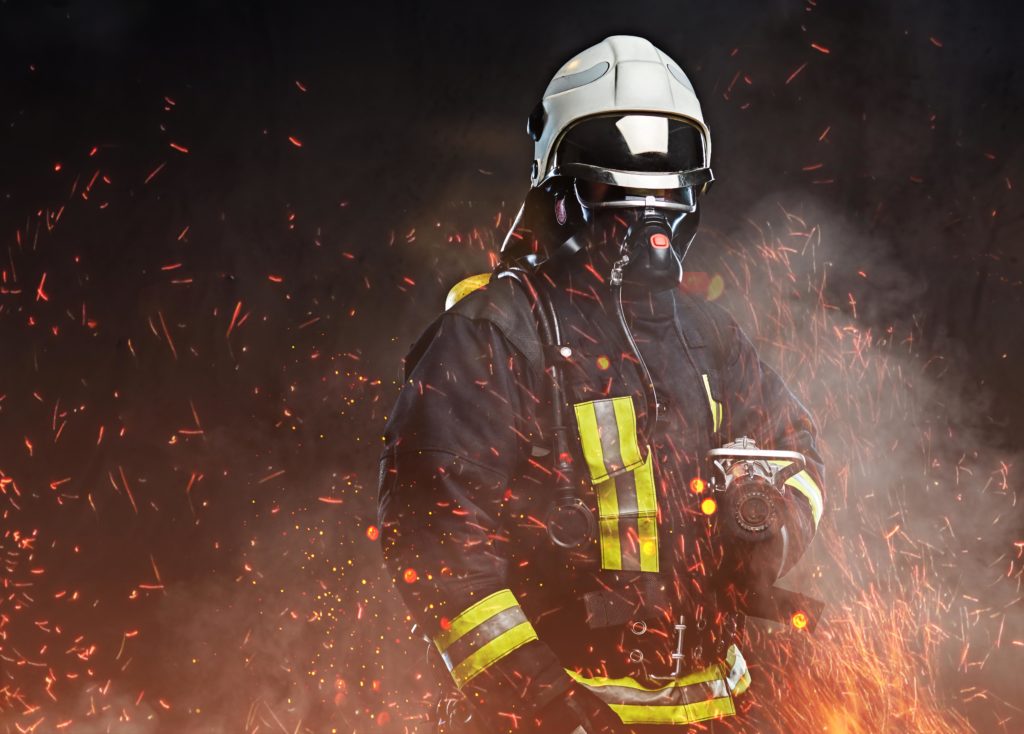 Historically, firefighters did not have the same level of protective clothing used today. Because of this most fires were fought from the outside of burning buildings and structures were rarely entered. Early in the history of firefighting, a firefighter’s outer clothing was more for warmth and dryness than for protection from fire. In the early 19th century, felt caps were worn of various designs and were more for decoration than service; this early headgear did not provide any protection against flame or head injury but did keep water off the firefighter’s face. The forerunner of the modern firefighter’s helmet was developed in 1830 by a luggage maker Henry Gratacap who was a volunteer firefighter in New York City. He saw a need for a better designed helmet that was both functional and provided protection to the wearer. This helmet is immediately recognisable today as the “New Yorker” style and little has changed in its general shape. The helmet had a high peaked front to retain a helmet shield which was usually adorned with a company name and number and it also featured eight rib sections on the dome (for added rigidity) and a long rear brim that channeled water away from the wearer’s neck.

The early use of long trench coats, made of leather or canvas and later made of rubber, was the forerunner of modern turnout jackets. Early coats had felt or wool liners to provide warmth in the winter. These liners later developed into the thermal protection liners found in today’s modern coats. Earlier rubber coats were much longer than today’s modern turnout jackets, reaching down to a firefighter’s mid thigh and were worn with long rubber boots called “three-quarter boots” which came above the firefighter’s knees. This interface of boot and coat left a large gap of protection against fire. This system has since been replaced by the modern combination of a jacket, pants with suspenders, and shorter rubber or leather boots, although some departments still wear the traditional old style of gear.

At the NFFF Firefighter Physiological Monitoring Technology Summit, Casey Grant, Executive Director of the Fire Protection Research Foundation, the research affiliate of the National Fire Protection Association (NFPA)—spoke on the future of wearable technology. Wearable technology is any type of technology that can be worn or built into present uniforms and/or protective clothing for the purpose of collecting data that can be transmitted and monitored that will provide useful information that will enhance firefighter safety. This technology could include physiological monitoring, sensing of gases, location of firefighters, personal alert safety system, etc.

The emerging field of firefighter wearable technology, specifically three areas of interest has become a growing topic in the industry:

The ultimate goal will be to use this data to provide near-real-time information to the incident commander (IC), who can then make critical decisions about the safety of their members operating on the scene.

The United States follows NFPA 1975, Standard on Station/Work Uniforms for Firefighters. NFPA 1975’s main purpose is that no part of the uniform garment “ignite, melt, drip, or separate” when exposed to a heat of 500°F for 5 minutes

By the 19th century there were so many different brigades in operation: insurance, volunteer, parish, institutional, estate, industrial, as well as combined police-fire brigades, it was almost impossible to have any standardisation in uniforms at all. Some wore tight woollen tunics over velvet-like breeches, with leather helmets. Others wore sombre grey trouser suits.  Some of the London brigades even adopted naval fashions, wearing low top hats (beavers), white canvas trousers and short double-breasted tunics, similar to a naval midshipman’s jacket.

The clothing firefighters wear to attend incidents and tackle fires has changed a lot. Here is a timeline of some of the most iconic uniforms and when they were introduced. When the early fire office and insurance company brigades were formed they introduced very colourful uniforms so that they could be easily identified.

In 1866, Chief Fire Officer Captain Sir Eyre Massey Shaw introduced a new uniform consisting of a blue double-breasted serge tunic and trousers. Each firefighter would have carried an axe and a hose spanner. The firefighter would also wear a number on their tunic. This number represented a person’s rank and the number decreased as their seniority increased.

In 1914, rubber leggings were introduced. The woollen trousers were easily waterlogged and became very heavy as a result. The new rubber leggings kept legs dry and were much lighter than wool when wet.

In 1974, the wool tunic stayed but the black rubber leggings were phased out and replaced with the iconic yellow leggings. The bright yellow leggings helped with visibility in smoke filled rooms.

The first Nomex suit was introduced in 1989. The fabric offered far greater protection from the heat and flames of the fire and was waterproof. These were the first suits that had the same protection in the coat and the trousers.

In 1999, the Inferno was phased into service. This maroon suit was more pliable and heat resistant than the previous suit. This allowed firefighters easier movement and the ability to stay in hot conditions for longer. The suit has three layers: fireproof, waterproof and thermal protection.

Introduced in 2010, this personal protective equipment (PPE) was made of the lightest, most protective materials possible at the time. The Ergotech Action design included many features to increase the comfort for firefighters, such as action pleats, shaped sleeves and knees.

The ‘gold standard’ of modernised personal protective equipment (PPE) reflects the changing role of the modern firefighter. The light colour of the ‘Titan 1260 fabric with PBI fibres in the gold colour will show contamination easier than the previous dark blue PPE. This will allow firefighters to see any carbon contamination or general detritus at an earlier stage and send the items for cleaning.

The London Fire Brigade uses the The ‘X-Flex’ range because, “it is lighter than our previous PPE, has action pleats in the coat to allow more movement and the tough outer shell offers good air circulation enhanced breathability and comfort. The outer shell of the garments offer the maximum thermal protection available, whilst minimising the risk of heat stress.

“The Rosenbauer helmet is fitted with an integrated torch in the crest to light up the firefighters working area. The gloves are made of a Nomex and Elk leather combination, which allows for them to be washed in a washing machine and all contamination removed. Currently gloves are washed locally at the station, but they don’t come up as clean as the new ‘gold’ ones will.

“The PPE can be used at any incident the London Fire Brigade attends and firefighters have been additionally issued with a pair of ‘Rescue Gloves’. These are a lighter glove that can be used for all incidents that don’t involve fire and give a greater dexterity and improve the health and safety for the user to handle smaller equipment” 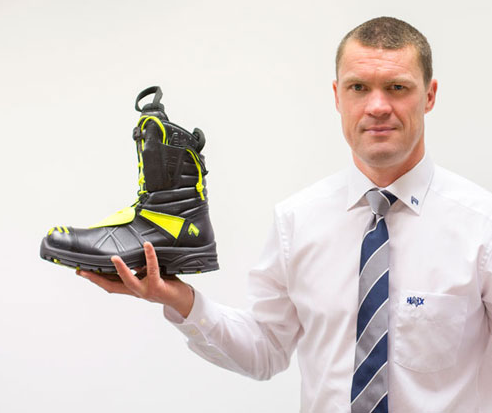 HAIX began specialising in firefighter footwear nearly thirty years ago. In 1992, its founder’s son Ewald Haimerl used his experience as a certified master shoemaker and Deputy Chief of Mainburg fire service to create a collection of boots that best served his comrades. The new design included switching rubber for leather to improve comfort, durability and safety.

Rubber fire boots first appeared in the 1930s, offering a cheaper alternative to leather. However, leather became increasingly popular in the 2000s because it is easier to decontaminate, can be three pounds lighter and provides better heel support, preventing discomfort or even injury on the job.

As the role of the firefighter has evolved over the last few years, intelligent use of new materials and closure systems such as the two zone lacing system have ensured a much more versatile, durable and comfortable boot.

Firefighter footwear must withstand various challenges. As upgrades in safety standards have developed, historical pull-on rubber boots have been redesigned to incorporate a protective toe-cap, materials have been enhanced to better protect against hazards and there has been a shift towards leather as the material of choice. Ensuring footwear meets the EN 15090:2012 standard will provide chemical, water, puncture and slip resistance, antistatic capabilities and insulation against heat and cold, giving today’s modern firefighters the confidence to focus on the job at hand.

It’s always fascinating to look back on the evolution of firefighter PPE throughout the years and see how far we’ve come. Thankfully, the days of woollen tunics and leather helmets are gone, and modern firefighters now have access to a wide range of state-of-the-art PPE to keep them safe on the job.

MSA Bristol, formerly Bristol Uniforms, has a history as a clothing manufacturer dating back to 1801, and has been a pioneer in the development of specialist firefighter PPE for more than 60 years. We developed the first aluminium suits for firefighters in the 1960’s, designed the first Nomex short tunics worn with yellow PVC wet legs for the UK Home Office in the 1970’s, and have continued to innovate with the creation of protective jacket and trouser combinations to the present day. Over this time, leading international fibre manufacturers such as PBI Performance Products and DuPont, and fabric manufacturers such as WL Gore and Hainsworth, have all made huge technological strides, meaning that there are now many highly specialised materials at PPE manufacturers’ disposal, which offer a wide range of protective benefits.

The story doesn’t end here though. The industry is constantly striving to develop even lighter fabrics, more efficient moisture and thermal barriers and ergonomic designs to help keep firefighters cool, dry and comfortable. Together, we are also rising to the challenge of better protecting firefighters from potentially harmful smoke particles, through the development of new particulate protection materials and innovative designs to reduce exposure. It will be interesting to see what the future holds for this dynamic, rapidly-evolving industry. 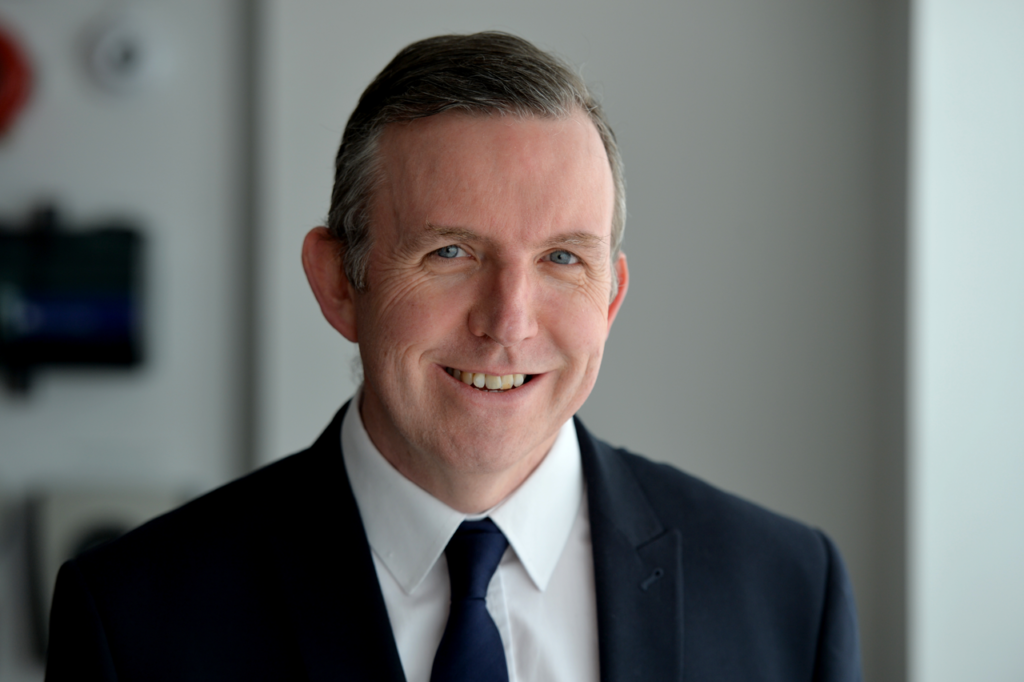 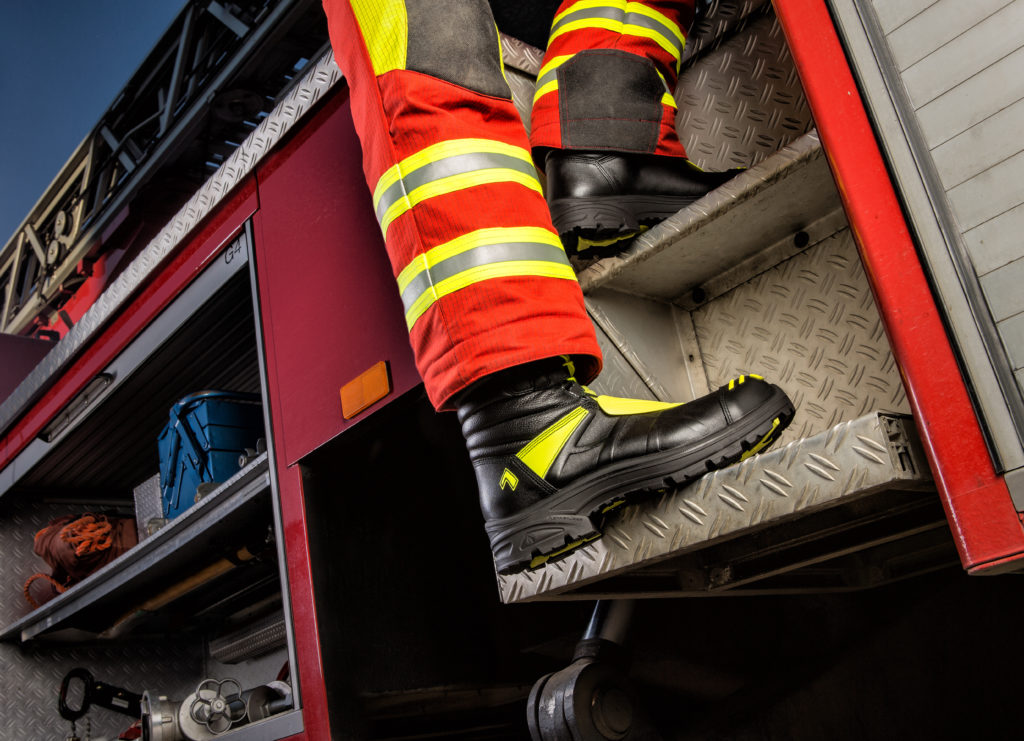 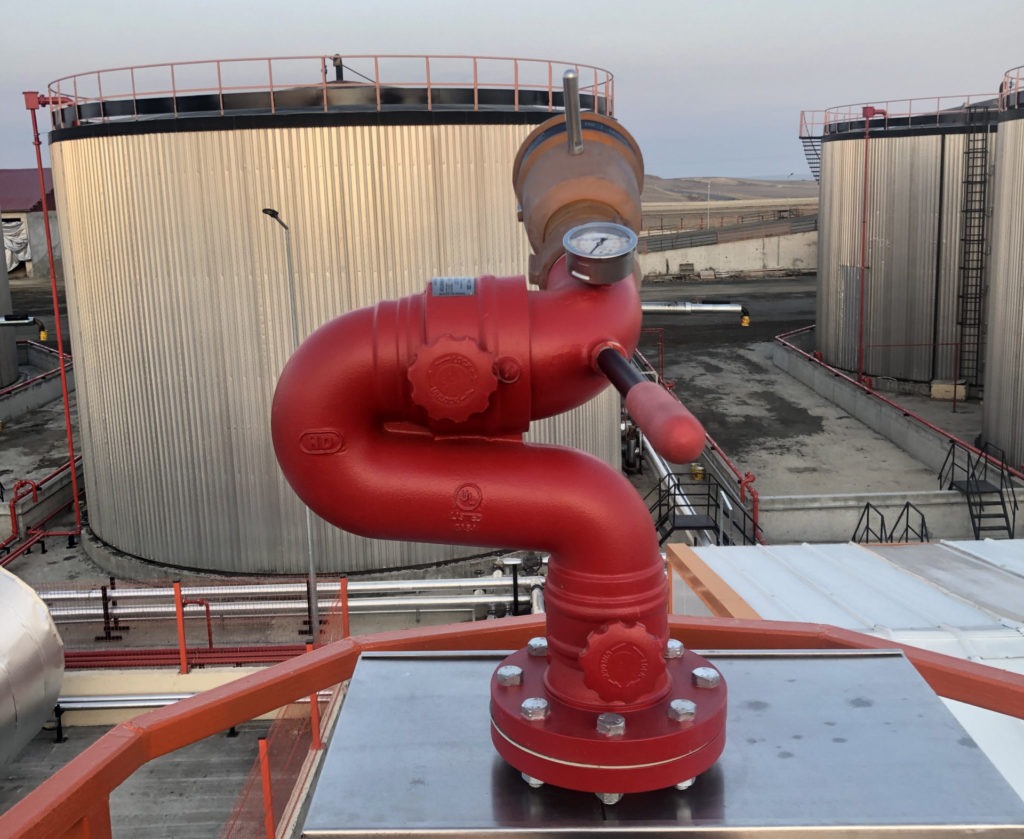 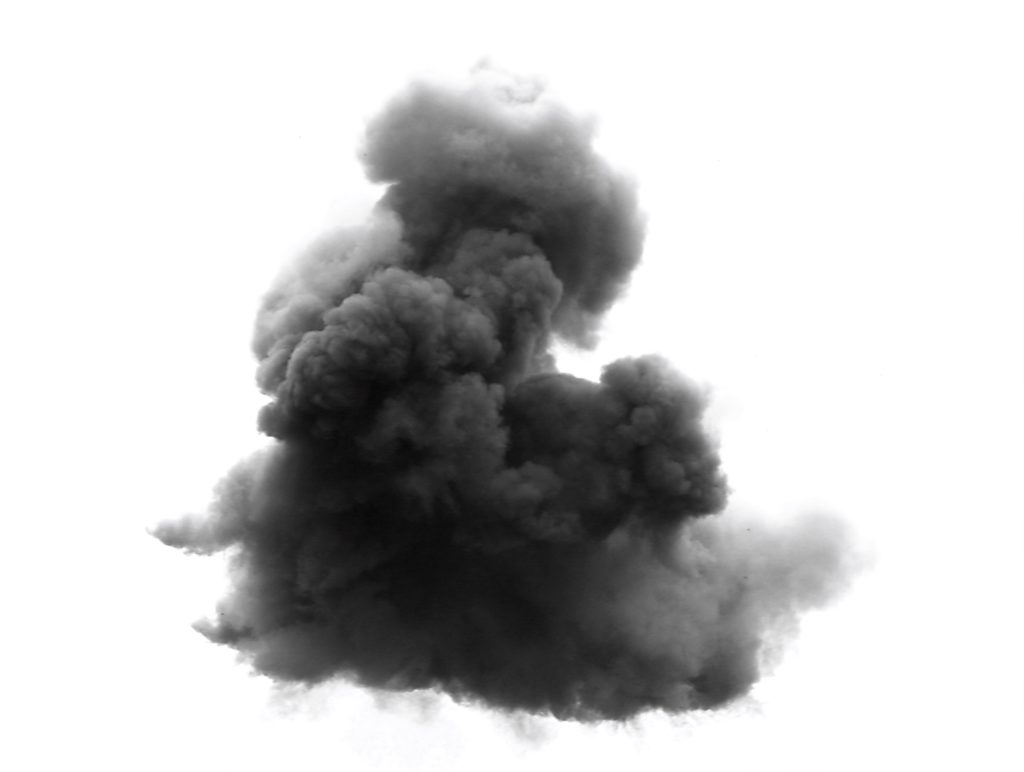 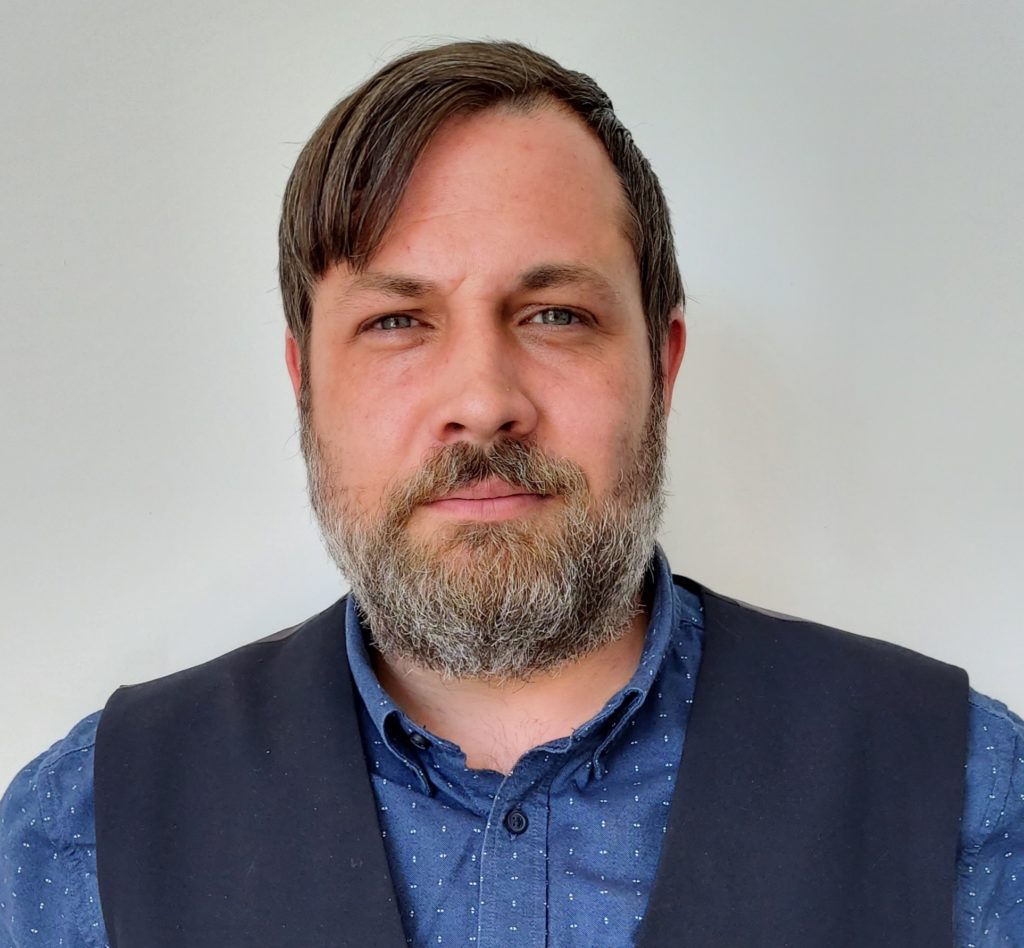 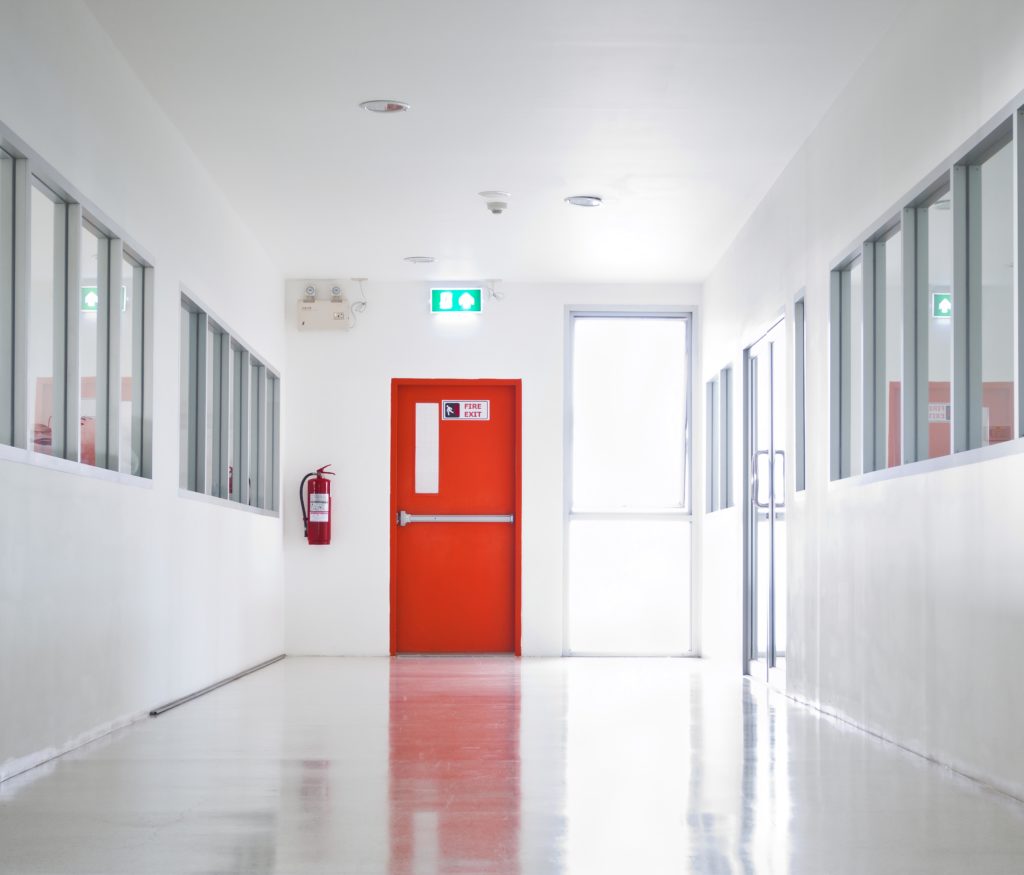