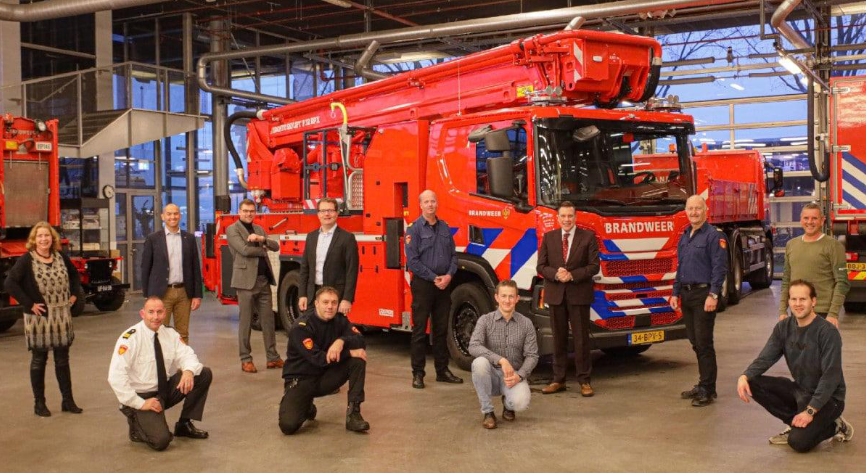 Bronto Skylift will be further assisting the Safety Region of Ijsselland in Netherlands after they agreed a deal for three new fire fighting aerial platforms with Bronto’s local distributor, Kenbri Fire Fighting.

The public tender regarding the supply and maintenance of 3 new fire-fighting platforms was awarded to Kenbri and the contract was signed in Zwolle on Tuesday 8th December.

The IJsselland safety region had issued the tender because the current rescue vehicles need to be replaced. The new 32-meter Bronto F32RPX aerials will be mounted on Scania P320 6×2 / 4 chassis and are expected to be delivered in early 2022.

They are to be stationed at the fire stations in Hardenberg, Kampen and Zwolle. The F32RPX features 32 meter working height, over 24 meter working outreach, spacious 500kg rescue cage and 3800l water capacity.

The chassis are produced in the Scania factory in Zwolle. They will roll off the production line around April 2021 and will be sent to the Bronto Skylift manufacturing facilities in Finland.

In addition to local chassis, Kenbri opened a service location for the Northern Netherlands in Dedemsvaart earlier this year, which means the brand new Bronto’s will have a local service and maintenance facility.

More than 500,000 residents in 11 municipalities live, work and enjoy recreation in the IJsselland Safety Region. These are the municipalities of Dalfsen, Deventer, Hardenberg, Kampen, Ommen, Olst-Wijhe, Raalte, Staphorst, Steenwijkerland, Zwartewaterland and Zwolle.