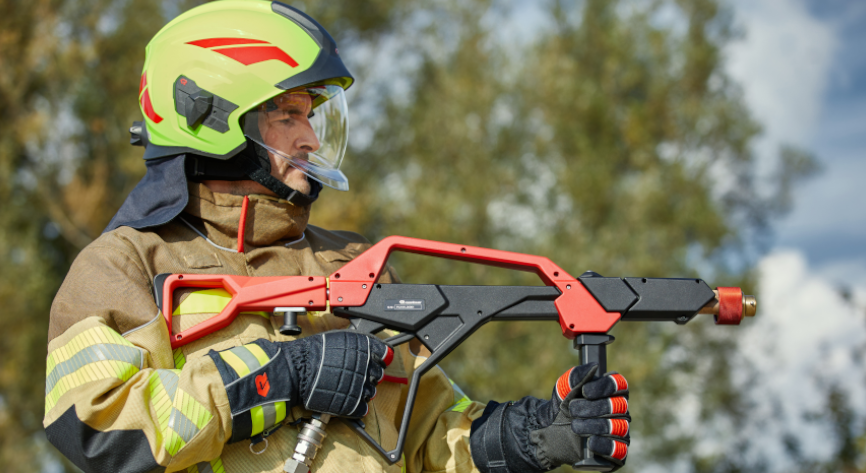 It combines ultra high pressure extinguishing technology with the function of water jet cutting and thus offers a multitude of new tactical possibilities.

It is used, for example, for firefighting in closed rooms without having to enter them directly in the initial phase, which significantly reduces the risks for the crews.

The cutting extinguishing system is also advantageous for fires in suspended ceilings and expansion joints or in closed areas, such as ventilation and filter systems or in silos, because the firefighting operation can be carried out from the outside and it is possible to fight fires that cannot be reached with conventional nozzles.

Both produce water mist in droplet sizes of around 100 µm (for comparison: NP nozzle approx. 500 µm). It is equipped with an integrated foam proportioning system with stepless proportioning from 0 – 6% and is supplied with newly developed Rosenbauer hose reels with hose lengths of 60 m (standard RFC CUTTEX and RFC CUTTEX XL) up to 120 m (RFC CUTTEX XL).

Both systems can be installed in fire-fighting vehicles (including aerial rescue devices and ARFF vehicles). RFC CUTTEX XL is powered by the PTO (power take-off), the SKID version RFC CUTTEX by a gasoline engine.

The centerpiece of the RFC CUTTEX system is the unique lance for cutting and extinguishing. The cutting operation is done by applying an abrasive material with a water jet.

This means that holes of three to five millimeters in size can be cut in nearly any material: brick, concrete, wood, metal, etc. With a two millimeter thick steel plate, for example, this takes only a few seconds. The repulsive forces are absorbed by an ergonomically designed shoulder support.

The vessel for the abrasive is hooked into the nozzle via a quick coupling, the capacity allows a cutting time of one minute. Without the cutting function, the RFC CUTTEX extinguishing system can be used as a normal ultra-high pressure extinguishing system.

Start the system, unroll the hose, start the firefighting operation – that’s how easily the RFC CUTTEX works. One person can operate the system on their own. The abrasive vessel can be changed within seconds, the cutting nozzle can be removed via a bayonet catch.

Full jet, spray jet, and cutting jet can be set via a rotary handle. RFC CUTTEX is also integrated into the Rosenbauer operating system RBC LCS, where all components installed in vehicles (pumps, foam proportioning systems etc.) can be controlled.

The Rosenbauer RFC CUTTEX cutting extinguishing system is the only fully integrated system on the market. It is perfectly suited for water-saving interior firefighting and develops an immense extinguishing effect, because all water in the room evaporates and has an inerting effect.

The additional water jet cutting function allows fires in closed rooms and systems to be extinguished safely and effectively without having to enter them. A system for those moments when new approaches to firefighting operations are required by fire departments.