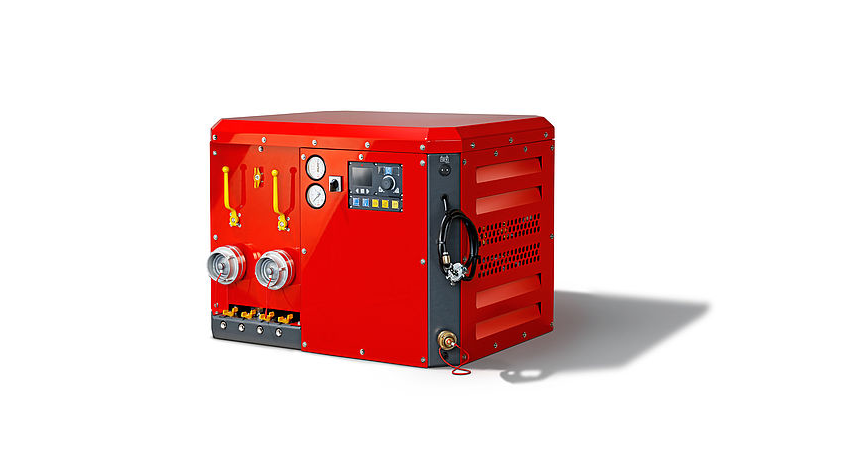 It offers the highest flexibility in fire fighting operations. It can be used to carry out a pure water attack, for example in situations where foam compounds are not allowed to be used.

With RFC CAFS Cube, heavy, medium, and expansion foam can be produced to combat classic solid and liquid fires or to flood cellars and storage rooms.

Wetting agent operation is also possible, for example to extinguish burning bales of straw. And the system provides high-quality compressed air foam, which can be used to quickly fight car fires, for example. RFC CAFS Cube is an all-in-one device for all types of firefighting operations.

In RFC CAFS Cube, a firefighting pump operates with a delivery rate of 800 l/min at 10 bar. This corresponds to a medium-sized portable fire pump according to PFPN 10-750, and RFC CAFS Cube can also be used as such.

In addition, a pressure foam proportioning system is integrated, with which up to 600 l water/foam compound mixture can be produced per minute (at 6 bar). Three proportioning ratios (0.3%, 3, and 6%) are available, which means that RFC CAFS Cube is also suitable for wetting agent operation.

This leads to a considerably improved extinguishing effect because the surface tension of the water is broken and the extinguishing agent is able to penetrate better into the flammable material.

In addition, RFC CAFS Cube foams the water/foam compound mixture into wet or dry compressed air foam as required. The CAFS mixing chamber has a capacity of 400 l/min at 6 bar and produces up to 1,600 l of compressed air foam, allowing at least two nozzles to be operated.

A particularly good extinguishing effect is achieved with compressed air foam. The very fine and homogeneous foam adheres to the flammable material for a long time (even on vertical surfaces), the water can evaporate almost 100%, the oxygen is effectively displaced by the flammable material, and the seat of the fire is cooled to a maximum.

The kinetic energy of the compressed air foam and the reduction of surface tension also ensure that the extinguishing effect is optimised. Moreover, compressed air foam achieves almost the same throw range as water (20 meters and more). Firefighting can therefore be carried out very efficiently with a large safety distance to the burning object, even in inaccessible places.

RFC CAFS Cube is operated via the new and largely self-explanatory RBC LCS Compact operating system and is ready for operation at the touch of a button.

Only the proportioning ratio is set if needed. The system features automatic priming, which switches off when the pump is filled. Water can either be supplied via a hydrant or drawn from any water source and from vehicle-based tanks.

The fuel and foam compound is supplied via external canisters, the extinguishing agent is delivered via two pressure outlets, a universal one for water, water/foam compound mixture, and compressed air foam and one for water only. The discharge pressure is automatically kept constant by a pump pressure governor.

The Rosenbauer RFC CAFS Cube can therefore be put into operation very quickly and easily and operated safely. The stand-alone system has a very robust design, can be used on the move and, thanks to its own engine, can also be installed in vehicles that do not have a power take-off.

The Rosenbauer RFC CAFS Cube is a high-quality, high-performance extinguishing system and ideally suited for the firefighting moments when flexibility is crucial to the success of the operation.