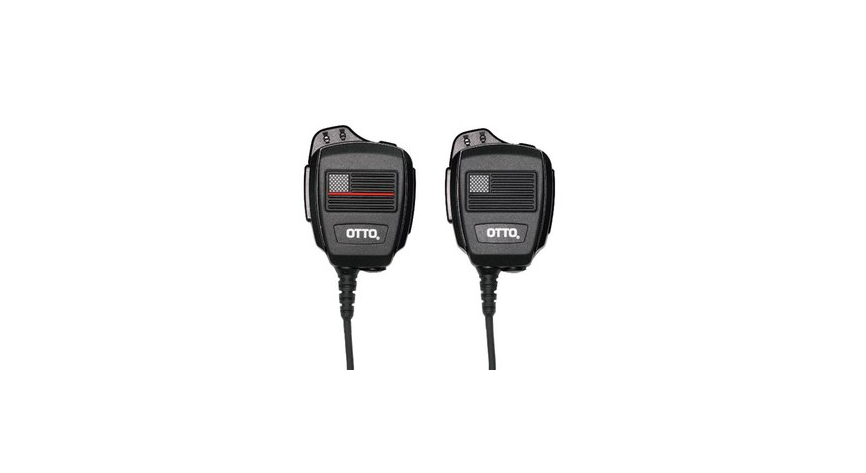 In support of the men and women who protect American citizens, OTTO has launched an adaption of most popular speaker microphones with new Thin Red Line and American Flag designs that support firefighters.

The Illinois based company has gained a reputation for rugged, reliable, and professional grade equipment and these speaker microphones live up to that. The Revo NC2 is a corded speaker mic and is an on-the-job must have. Revolutionary noise-canceling technology delivers optimum voice clarity even in high-noise situations.

The Revo NC2 features large and rugged PTT buttons that are easy to use even when wearing heavy gloves, as well as an intuitive, side-mount high/low slider switch that adjusts volume easily.

As a proud American based company, OTTO’s General Manager, Dan Stanek, has been acutely watching the news and became increasingly aware of the dangerous spread of wildfires that have been plaguing our nation.

It was during this time the idea to launch a speaker microphone that specifically shows pride for the men and women on the frontline came to fruition.

While a firm believer OTTO’s speaker mics already supported the industry, Stanek’s goal was to provide a way for our brave firefighters to carry it on their chest.

The American made products have received praise from users. “The Revo NC2 from what I can tell, is one of the best shoulder mics on the market. The microphone is noise-cancelling, and the audio clarity on the speaker is significantly clearer and cleaner than the standard shoulder mic that I was issued by my department,” says J. Nguyen.

These patriotic and fire pride speaker mics are compatible with almost all major radio manufacturers and OTTO has officially launched these microphones for pre-order. Visit: https://www.otto-comm.com/products/speaker-microphones/speakermicrophones for more information.