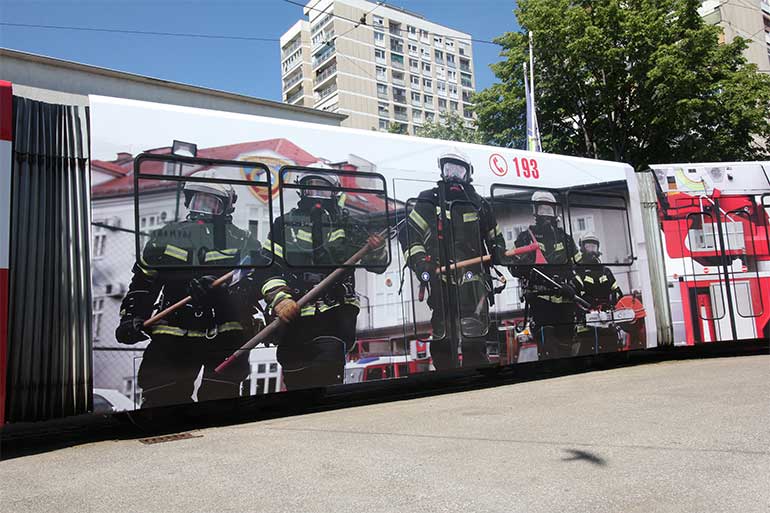 Zagreb ’s heroic firefighters have been honoured with a special mural on the city’s passenger trams to validate all their hard work in the fire industry.

The mural is to thank Zagreb Fire Brigade for their quick and thorough response to a large earthquake measuring 5.5 on the Richter scale, which hit Croatia’s capital city in April this year. It also celebrates 150 years of firefighting in the city.

This was the largest earthquake to rock the historic city of Zagreb in 140 years, and tremors were felt as far as southern Austria and Slovenia. Sadly, one person died, and 27 people were injured in the earthquake. Thousands of buildings were also damaged, plus cars were crushed and roads were blocked by falling chunks of masonry.

Zagreb Fire Brigade is a long-standing customer of Bristol Uniforms and its International Distributor Teh-projekt, who are delighted to see the firefighters honoured in this way, and to see the XFlex structural firefighting PPE take centre stage in the city.

XFlex is Bristol Uniforms’ flagship PPE design. It is ‘spiral-cut’ so none of its seams are straight, but instead, follow the body’s curves and contours and allow much more movement and flexibility – perfect for scenarios where firefighters have to work in tight spaces.

Richard Cranham, International Sales Manager at Bristol Uniforms said: “In very difficult circumstances, the firefighters of Zagreb responded quickly, putting out fires and rescuing people from damaged buildings. This is a wonderful tribute to their hard work and bravery.”