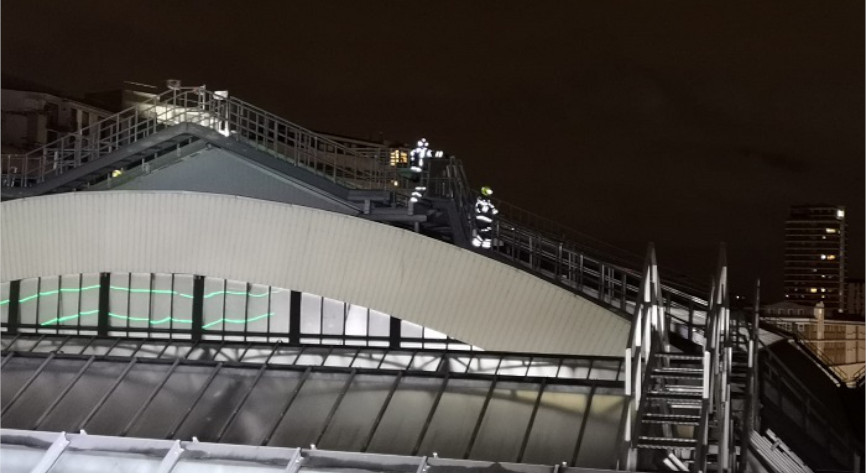 The hard work of London Fire Brigade firefighters in the early hours of Feb 10 prevented major disruption at Victoria Station in the capital.

Strong winds caused by Storm Ciara damaged the gantry above the platforms and left it in a precarious position. The result meant it could have fallen onto the platforms below or cause damage to the glass roof above.

Fire Rescue Unit crews worked at height using ropes to access the gantry and secured it greatly reducing the risk of it collapsing. Their work unable the platforms to be used during the morning’s rush hour and preventing disruption to the public. This incident was one of hundreds of call outs London firefighters faced due to Storm Ciara.

The London Fire Brigade first started taking storm related 999 calls around 3am on Feb 9 and early indications showed that firefighters attended around 160 weather incidents in the following 12 hours.

The vast majority of the call outs were to trees, roof tiles, windows and satellite dishes in precarious positions. Calls came from across the capital with Ilford, Croydon, Enfield and Sidcup being amongst the worst hit.

The Brigade’s 999 control was exceptionally busy taking around 800 emergency calls on Feb 9 nearly double the number staff receive on average.

Other significant Storm Ciara incidents involved a roof that had blown off of a block of flats on Bermondsey Street, a collapsed crane in Stanmore, a bundalow’s roof falling off onto an adjoining house in Wood Green and a dolls house blown into a tree in Wembley.