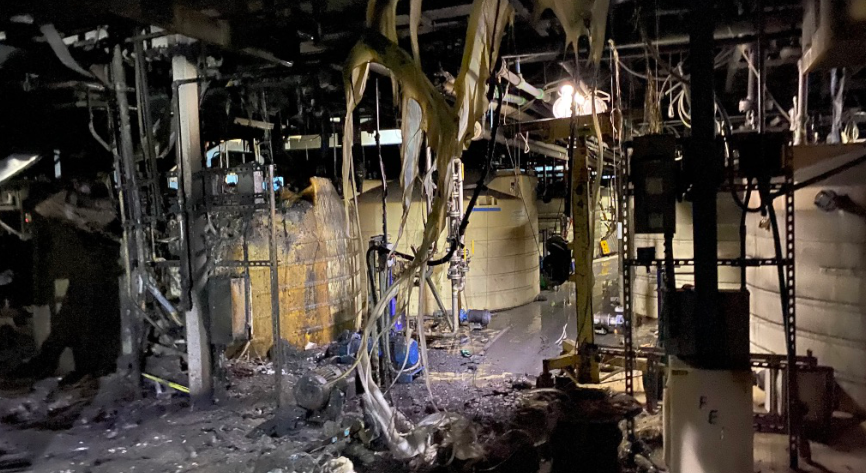 Aqua Metals announced that on November 29, a fire occurred in the AquaRefining area of the plant. The fire took place in the evening and fortunately, there were no injuries as the building was vacant at the time. Local fire authorities responded rapidly and extinguished the fire that evening.

The cause of the fire is presently unknown and the Company is working with the local authorities and other parties to investigate the origin of ignition and root cause. The flames at one point reached the upper roofline of the AquaRefinery area and damaged the roof.

The fire and related intense heat and smoke caused significant damage to a material amount of equipment in the AquaRefinery area, including all 16 AquaRefining modules, control wiring and other supporting infrastructure. In addition, approximately 1,600 gallons of AquaRefining concentrate was released within the plant due to a tank succumbing to intense heat.

That concentrate, along with thousands of gallons of water deployed to extinguish the fire, resulted in approximately 1 inch of liquid to spread throughout the entire plant and reached the in-plant operational offices. Fortunately, this liquid remains contained within the plant and the Company has already deployed measures to recapture the liquid and begun placing it into its water treatment plant and tanks.

Most of the power to the building will remain off until the Company, utility provider and local regulators are confident that it is safe to begin returning power. In the meantime, generators have been deployed for various critical systems including safety and security.

After initial damage assessments, the Company believes that it will incur a material cost and experience a material delay in operating any processes within the plant. Specifics on timelines, costs and availability of insurance coverage will be determined as we progress with inspections, assess damage and plan accordingly.

The Company, however, expects that the recovery and rebuild of the AquaRefining area could take several months or more.  The Company has already been working closely to coordinate recovery activities and plans with our supportive Operations Management and Maintenance partner, Veolia.