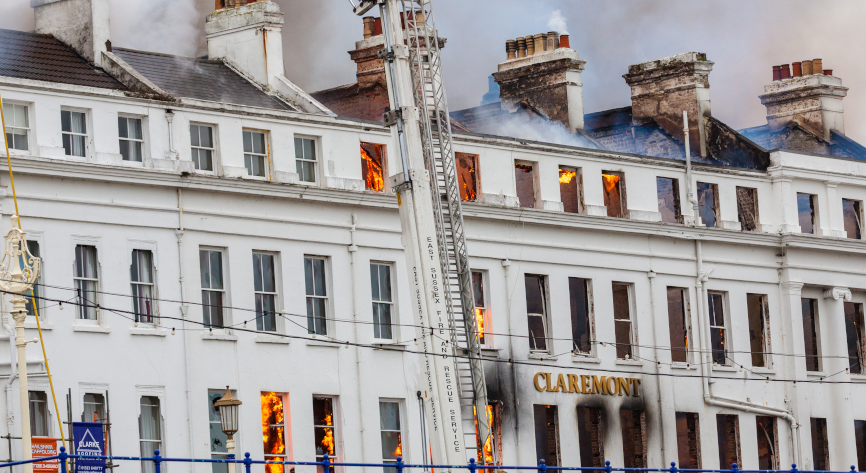 The Claremont Hotel in Eastbourne has suffered critical damage following a fire, with part of the Victorian seafront hotel collapsing.

The Claremont Hotel is a Grade II listed building located in the Sussex town and found itself ravaged by flames after a fire broke out while most of the guests there were eating their breakfast.

Since the fire, part of the rear wall of the hotel has now collapsed following reports that a chimney “appeared to be moving”, according to the East Sussex Fire and Rescue Service (ESFRS).

No-one has been injured as a result of either the blaze or the infrastructure collapsing, but the building is still unstable and two fire crews, as well as building control, are still monitoring the situation.

According to a spokesman for the Wealden District Council, the fire service contacted building control about one of the chimneys, “which appeared to be moving.”

“The wind direction changed which led to the rear wall of the hotel structure collapsing internally on the existing debris,” he said.

Further investigations will take place once the building is deemed safe.

According to the owners of The Claremont Hotel – Daish’s Holidays – “significant damage” to the hotel has been made, to the point that the damage to the hotel, which dates back to the 1850s, was “devastating”.

The company have also said that there were 130 guests and staff members in the building when the fire broke out and that close to 60 firefighters and 12 fire engines were on the scene at the height of the fire.

While no-one was seriously harmed, the ambulance service said that six people were treated for small injuries, while one person was sent to hospital with breathing difficulties.