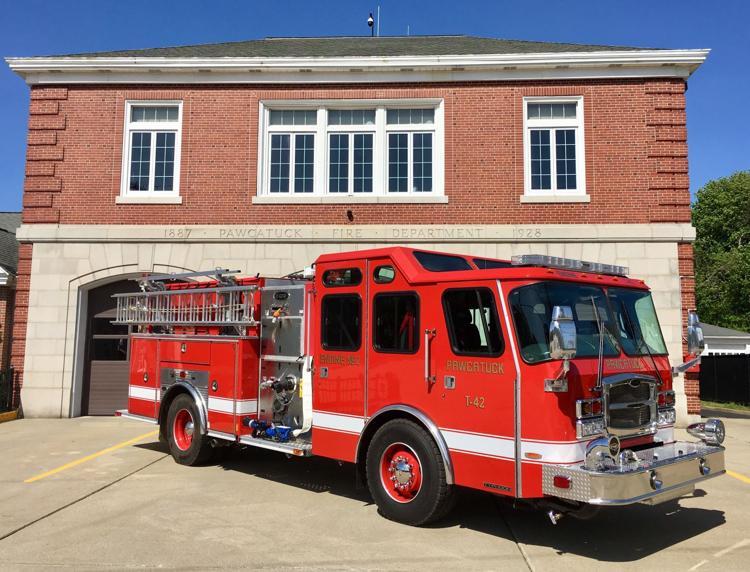 Members of the Pawcatuck Fire Department have welcomed a new pumper truck to its fleet, part of an effort to assure the department’s apparatus are well-maintained and ready to serve the community into the future.
The department took receipt of the truck, a 2019 E-One Typhoon pumper truck, approximately two weeks ago. The custom-built truck cost the agency US$439,000 and replaces a 1994 truck built by the same company that had served the town for 25 years, Fire Chief Kevin Burns said. “We replace this kind of equipment on a regular cycle and this was part of that (ongoing effort).”
The Typhoon, which features a roll cage cab and a 330-600 Cummins HP engine according to the E-One website, was purchased based on custom specifications that both helped to meet the departments need while simultaneously reducing the cost.
The average price for a pumper truck in approximately US$650,000 and can go even higher based on a variety of optional features. The town was also able to trade in the 1994 model to help further reduce the cost, officials said.
“When we purchase a truck, we try and keep it as focused and specific to the features we need,” Burns said. “We have been fortunate to have members who can assist with custom work, and that’s helped keep the costs down as well.”
One of the new aspects of the truck is an expanded water tank that will allow the pumper to transport 750 gallons of water, which will help provide a stronger initial response to fire calls. The 1994 model held approximately 500 gallons of water, but Burns said the department sought to increase that capacity with the latest purchase.
Burns and Assistant Fire Chief Byron Stillman said the expanded capacity can only serve to enhance response to one of the more populated sections of Stonington. Although the department and its members are excited to put the new truck to use, Burns said it was still bittersweet to trade in the old model.