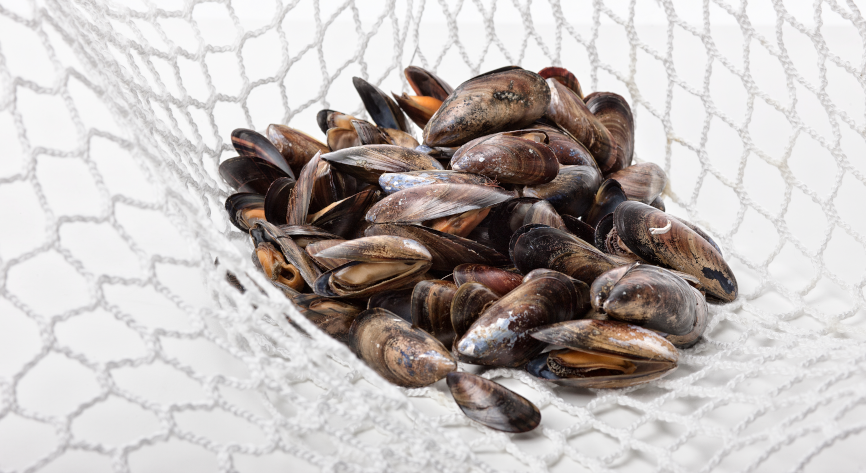 The Lenzing Group, world market leader in specialty fibres based on the renewable material wood, today introduced the botanic solution for marine application, in particular for aquatic farming, to the public at the Techtextil Frankurt Fair. The wood-based LENZING branded lyocell fibres are used for the construction of ropes and nets in order to support the cultivation of marine cultures such as mollusks, mussels and edible seaweed to reduce plastic in the sea.
Plastic a serious problem for our marine environment Annually, about 8 million metric tons of plastics end up in the ocean, resulting in an estimated 165 million tons of plastic debris, currently floating in the marine environment, threatening the health and safety of marine life. The loss of conventionally used synthetic fibres and plastics in the ocean accounts for 80 % of all marine pollution.1 This is not only dangerous for marine life but also for humans as we consume some of these micro plastics through our food. “The development of 100% wood based mussel nets with LENZING Lyocell fibres contribute to the reduction of the annual plastic quantity in marine environment”, says Marine Crnoja-Cosic, Head of Application Development New Business Areas.
LENZING Lyocell innovation for the marine industry The Lenzing Group initiated a project in collaboration with two major partners, Sächsisches Textilforschungsinstitut e.V. (STFI) and FIUM GmbH & Co. KG – Institut für Fisch & Umwelt (FIUM) in order to develop a sustainable solution for the marine industry, which does not compromise mechanical performance. There are many different methods of using textile structures as a support for the growth of marine organisms. The important feature of the present invention is that the textile structure is made of wood-based cellulosic fibres. This gives the advantage that any of the textile structure which is released into the environment due to accident, storm damage, negligence or any other cause will degrade in a reasonable time and not leave nondegradable residues.
Up to now, nylon and polypropylene are most commonly used for rope and net materials. Although these materials are durable and have a sufficient strength, they do not have a natural origin and are not marine biodegradable. They stay in the oceans for years. Nets and ropes consisting out of LENZING Lyocell fibres proved that they have sufficient strength to carry the weight of the growing cultures without breakage and have the big advantage of biodegradability in the oceans.
Proved by tests The cooperation partner Sächsisches Textilforschungsinstitut e.V. constructed different prototypes and replicates out of LENZING Lyocell fibres in March 2018. Thereafter, an initial underwater material test was started in the Baltic Sea. The prototypes were installed in 6 to 10 meters depth at an artificial reef platform in Rostock Nienhagen. The objective of the trial was to proof that marine applications produced out of LENZING Lyocell fibres can fulfil the key properties of conventional marine supports, which are sufficient strength to carry the weights of the growing cultures without breakage. Moreover, the trial should investigate if LENZING Lyocell fibres represent a pleasant environment for particular marine organisms and also proof the marine biodegradability after usage. After four organized dives by our project partner FIUM, first test results were available. All LENZING Lyocell fibres represent an appealing growing material for marine organisms. Overall 14 different sea dwellers like blue mussels, crustaceans, echinoderms or snails adhered on the test material. First test results regarding performance and biodegradability were promising.2
Compostability and biodegradability are key Sustainability advantages in aquatic farming are particularly evident, given the fact that the material is being used directly in the oceanic eco system. LENZING Lyocell Standard fibres are certified as compostable and biodegradable under industrial, home, soil and also under marine conditions. If pieces of the nets break off, they will harmlessly decompose and have no influence on marine organisms. In order to close the sustainability loop, the nets can be composted after harvesting and processing.
Further developments “This development brings sustainable solutions to aquatic farming encouraging LENZING to assess and establish further steps towards commercialization, together with innovative value chain partners”, says CrnojaCosic. “Furthermore, future development will focus on optimizing the nets construction for more durable products broadening the scope of 100% Lyocell based marine nets in marine environment,” concludes CrnojaCosic.”
www.lenzing-fibers.com